Dark Cloud slumped into my office before I had a chance to pick up the phone and fake a call. She flopped into a chair, looked at me with her signature doughy pout, and sighed.

I knew how this worked. I lived it at least once a week.

Dark Cloud would invade my office and huff. I was supposed to ask what was wrong. And then she would tell me.

She was either annoyed, frustrated, irked or offended. At everyone. Most often because someone had asked her to actually do her job. The conversations were more airing of grievances than discussions.

When she’d had her fill of belly-aching, she would slow-stomp past the terrified assistants and slam her door.

Later in the day, she would send some passive aggressive emails and make accusatory comments about who had eaten the last cookie (yes, it was usually me).

On the days when she didn’t bother me directly, she still managed to cause trouble, sowing misery in the office by ruling the supply cupboard with a tight iron fist or demanding excruciating detail for the smallest petty cash request.

I couldn’t fire her. I couldn’t even get her out of my office.

But that day, I refused to be manipulated into speaking.

I sat silent. It was a standoff. It was petty and childish and far from crack leadership but I’d had it. She was too much work.

I cocked my head and widened my eyes, cursing my body for betraying me by wordlessly catering to her brattiness.

“Well, that’s great,” I answered. I was surprised. An electric eel would be easier to love. “Um, congratulations?”

Why was she telling me this? Why couldn’t she just get out of my office?

I was sort of amazed, and sort of revolted like that time when KFC announced that insane sandwich. 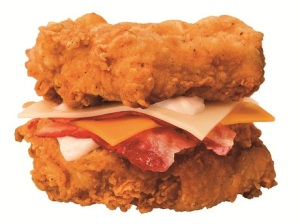 “I met him online. We both enjoy swimming. It is so intense!”

I admit I was thinking of setting a small fire to escape as she droned on about how they both despised their stupid co-workers but loved cats and how she needed to be where he was. Out west. ‘In love’ Dark Cloud was just as awful as ‘Bitter and Hostile Dark Cloud’.

“So I have to quit,” she finally said, in a sorrowful apologetic voice.

It was time to listen properly!

“I know it’ll be tough without me but I have to do this,” she said.

I bit the inside of my cheek to clamp down the joy. “Well, if you’re sure…”

The Dark Cloud was on the horizon and headed away.